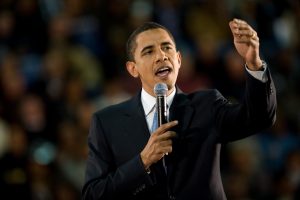 WASHINGTON, D.C.—In an increasingly common moment of candor, President Obama revealed during a press conference today that if Republican candidate Donald J. Trump wins the presidency on November 8, he intends to spend his remaining time in office “farting repeatedly and bare-assed” into the historic Oval Office Screaming Pillow.

The President’s comment refers, of course, to a relatively obscure bit of White House lore dating back to 1915, at the time of the Lusitania disaster and an otherwise trying time in then-President Woodrow Wilson’s personal life. Wilson lost his beloved wife Ellen Axson Wilson in late 1914, mere months before World War I broke out in Europe. Ellen was not only a wife to the President but a political confidant, and her death came at a time when he most needed her level-headed counsel during mounting domestic tensions around the European conflict. Fortunately for the grieving Wilson, in early 1915 he met a dazzling young Virginian named Edith Galt, with whom he was immediately enchanted, reportedly commenting to a friend after their initial introduction that “Ms. Galt is exquisite, with an intellect nearly as massive as that bosom of hers.” After a (scandalously) brief courtship, Galt became a de facto—and of course secret—nighttime occupant of the White House living quarters.

The night in May 1915 that Wilson learned German submarines sunk the Lusitania steamship along with more than a hundred American civilians—a tragedy that would ultimately lead to American participation in the Great War two years later—Wilson called for Galt to join him, hoping some wee-hours romance may help to soothe his terrible distress. But Galt arrived late, only to then casually inform Wilson that, regrettably, she had just been paid a visit by “Mother Nature,” and had a “crazy bad headache” to boot.

At that fraught moment, the prospect of being limited to making out and, at best, some unenthusiastic hands stuff was more than Wilson could bear, and legend has it that he stormed out of the bedroom like a man possessed, grabbing the nearest throw pillow on his way out, and spent the remainder of the night in a Lincoln bedroom closet, screaming and weeping into the pillow for hours until he exhausted himself into fetal-position slumber.

The Screaming Pillow has been a staple of presidential stress relief ever since, helping Wilson’s successors weather the storms of their respective administrations, from Kennedy’s Cuban missile crisis to Clinton’s impeachment, from Nixon’s Watergate to George W. Bush’s failed attempts to learn the rules of chess.

So, President Obama’s vow to break wind into a White House artifact that has served such an intimate role to so many American leaders is an indication of just how little he thinks of Mr. Trump. “Sure, I know Harry Truman was clutching the Pillow to his chest when he decided to drop nukes on Japan,” Mr. Obama said, “but if that criminally insane piece of shit orange-faced fucktard [Mr. Trump] slithers his way into my house, I’m a eat Bush’s baked beans and blast my ass into that floral-patterned petri dish every night till January 20th.” (The Pillow as “petri dish” refers to the fact that, per tradition, it has not been cleaned since Calvin Coolidge drunkenly urinated on it in his sleep in 1928).

In any event, and much to the relief of an exhausted electorate, the fate of the country at large will be decided tomorrow, although the Screaming Pillow’s sanitary condition continues to hang in the balance regardless of who wins the November 8th contest.

“Honestly,” the President said to reporters with a wry smile, “even if Hillary wins, I’ll probably give it a couple toots for good measure.”♦