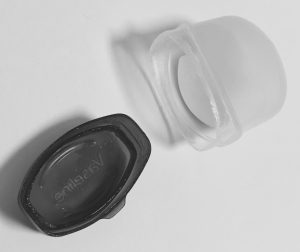 SCHAUMBURG, ILLINOIS—After an extraordinarily long period of regular use, a suburban Chicago couple reported today that it finished an entire full-sized container of Vaseline. Sources confirmed that the fragrance-free “Wonder Jelly” had been sitting on the bathroom counter for God knows how long.

“I think I bought it, jeez, sometime during the Bush II administration,” said Henry Foster, 37, of the 13-ounce, blue-and-beige container of name-brand petroleum jelly. “I remember I just kind of randomly got it one winter because my knuckles were really dry and starting to crack, and then at some point I also figured out it made a pretty good lip balm, so I liked to keep it handy. I would never had guessed then that three apartments and two kids later it would still be sitting on my bathroom sink. I’m really going to miss the little guy.”

Henry’s now-wife, Liz Turner-Foster, inherited the ointment unwillingly during the couple’s courtship, initially regarding it with skepticism. She was grossed out by the prospect of sharing semi-translucent goop dotted by another human being’s fingertips, and, admittedly, somewhat troubled by the fact that it predated her relationship to Henry and for all she knew had been used by him or even, God forbid, an unknown third party for some kind of unsanitary off-label purpose. Liz considered secretly replacing it, but before she got around to making the swap she badly gouged her shin during a harried shaving accident in Henry’s shower and resorted to using the Vaseline as a salve since he didn’t have any Neosporin in the apartment. “At first I couldn’t believe I was even touching the stuff, but it really made my gash feel better. I came around pretty quickly after that and started using it like it was my own,” Liz said. By the time the two married and bore their first child, the tub of white petrolatum had become a fixture on the bathroom counter between Liz’s electric toothbrush and Henry’s Speed Stick. “That space just seems so empty now,” Liz said. “I really can’t believe it’s gone.”

The Vaseline served the Foster family faithfully for years, soothing innumerable shaving nicks, minor cooking burns, and even helped Liz navigate a particularly nasty bout of hemorrhoids late in her second pregnancy. Unfortunately, its seemingly inexhaustible supply lulled the Fosters into a false sense of security that it would last forever. “You just kind of get comfortable in the routine of smearing a bit over a patch of eczema here, my kids’ skinned knees there, and you start thinking it’s impossible for the stuff to ever run out. Then when it does you just feel completely blindsided,” Liz said, remembering that it even survived an ill-conceived experiment by the couple’s eldest child apparently designed to determine how much of its viscous contents could be streaked along the tail of Mister Kitten Britches, the often-moody family tabby cat, before he totally freaked out.

But for Henry the writing was on the wall. “I knew the end was coming,” he said. “I popped the lid open one night and saw it was getting low and I thought, Jesus, this thing is actually going to run out soon.” But while Henry braced himself for the unthinkable, Liz had trouble letting go. “She just kept scraping the bottom of it night after night, determined to coat her fingertip one last time,” Henry said. “Finally, the other night she was holding it up to the light over the medicine cabinet trying to dig some out of a crevice on the inside edge of the lid, and I just took her hand and said, ‘honey, I’m sorry, but it’s all gone.’ It’s been really tough on her.”

Henry also has concerns about how his kids will receive the news. “Honestly, we may end up just quietly getting a new one and hope they don’t notice that it has a label that doesn’t look a hundred years old,” he said. “I don’t know that they’re ready to process this kind of thing yet.” This tension has been compounded by the fact that it will probably take at least three trips to Target before one of them actually remembers to buy more.

Nonetheless, despite uncertainty around the future of the family’s moisture retention and wound care, life for the Fosters has had a way of pressing on. Henry and Liz, their fingers knotted together comfortably in Liz’s lap while their children tease a dour Mr. Kitten Britches with a pipe cleaner in the next room, believe now more than ever that every day is a gift. They will fondly remember the grace and stoic dignity with which the erstwhile ointment occupied its station on the bathroom sink, and look forward to opening their home and hearts to a replacement tub. “It’s what the old Vaseline would have wanted,” Liz said as she dabbed her eyes with a neatly folded tissue.

The couple plans to hold a private service tonight after the kids go to bed in the form of debating whether to recycle the empty plastic container with or without the lid.♦