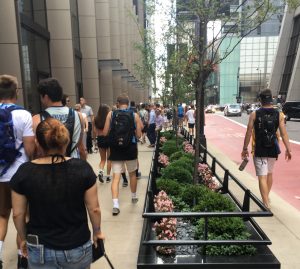 GRANT PARK, Chicago, Illinois—Downtown Chicago is reeling this weekend from the sudden influx of tens of thousands of just-hatched teenage clones flooding Grant Park for Lollapalooza 2016, the iconic alt-music festival now in its 25th year. “It’s really something to see,” South Loop resident Mike McNally, 35, said as he watched a group of scantily clad female hatchlings stumble onto State Street from the Harrison Red Line stop. “It’s remarkable how they all look more or less identical, and seem to lack even the most basic capacity to make an independent decision. I mean, this is the third group in ten minutes I’ve watched come up from the subway. They’ll just stand there for a few seconds, totally oblivious to the fact that they’re in everyone’s way, and then they’ll just kind of twirl around in synchronized circles and bellow in unison ‘oh my gawd, like, which waaaay/oh my gawd, like, which waaaay’ for a while before they start walking in the total opposite direction of Grant Park. Happens every time.”

While the annual rock fest always leads to a temporary population boom downtown, this year it just so happened to coincide with the hatching of the largest-ever crop of artificially created teenage clones at the Illinois Center for the Advancement of Molecular Cloning, located in a nondescript office building 30 miles west of the city in Downers Grove. And while the massive inrush can be an annoyance to locals, it also represents a capstone achievement for the Center. “We’re very proud of the 2016 release, not only because of the numbers but the unrivaled quality of our product,” says Dr. Gavin Dinkus, director of the Center’s program on adolescent cloning. “You look at these kids and you think, wow, you know, these guys are almost human.” Indeed, the 2016 “graduates”—in industry argot—are the culmination of a lot of hard work. “We’ve really tried to showcase the advances we’ve made over the last year with these little boogers, and I think it’s obvious in the result. I mean, short of having a conversation with one of them face to face, you almost can’t even tell they’re genetically engineered knockoffs. Not to mention, a lot of them are pretty easy on the eyes,” Dr. Dinkus said with a proud, fatherly smile.

But even amid this quantum leap, Dr. Dinkus and his team are keenly aware of their prototypes’ limitations. “No matter how good the science gets, we’re talking about a breed that’s had very little time to acclimatize to the nuances of a complex culture,” a feature that often hinders their collective ability to make challenging decisions. To accommodate this, the Center outfitted this year’s class in the style of dress dubbed “Basic,” primarily because it removes the “heavy burden” of choice that the graduates are not always capable of bearing. “There are only about three different variations with this style of clothing,” Dr. Dinkus said, “so even the ones with extraordinarily limited intellectual capacity seem to be able to pull on high-waisted short shorts and a striped tank top. Floral-themed headbands also seem to be within their reach.”

One of the Center’s chief disappointments this year was its failed attempt to imprint each individual graduate with a unique manner of speech. “I won’t bore you with the details but the process was just too unwieldy to master before the release date,” Dr. Dinkus said, “so we basically just gave them each the same cache of words, superlatives like ‘super’ and phrases like ‘I feel like’ being some of our staples. As far as the voices go, we use the same base program and basically just try to vary the pitch a bit. Ultimately they all pretty much sound the same.”

But Dr. Dinkus is quick to remind critics of one of the Center’s major triumphs: the clones’ expert smartphone use and mastery of social media. Center staff was thrilled with how quickly they got that one right, nailing it down with an earlier generation and holding steady ever since. “I swear, it’s like these kids come out of the synthetic womb already programmed to Instagram a ‘duck face selfie,’ Tweet some cutesy observation about a trending topic, and fire off a group text all at the same time.”

In any event, the 2016 rollout’s overlap with Lollapalooza presents Dr. Dinkus with a prime opportunity to amass new data to address the areas still short of the mark. Marshaling the graduates together in large numbers will allow the Center to further study why they immediately pick up social cues and modes of communication from one another, but struggle with assimilating characteristics from older generations of naturally conceived folks who actually have the ability to consider people other than themselves. “I know everyone in the neighborhood hates it, but Lollapalooza is a blessing for us,” said Dr. Dinkus, describing the tacky, large-scale music festival as a crucible that could generate lots of valuable new information.

McNally, the South Loop man anxious to reclaim his neighborhood at the end of the weekend, also acknowledges that Lollapalooza and the clones are “perfect for each other.” Engineered to value cultural homogeneity and the safety of the herd above all else, they’re well-suited to unblinkingly worship the middle-class values so perfectly embodied in the tepid, self-congratulating musical fare that’s been a mainstay of Lolla since alternative music turned, in McNally’s words, “totally gay.”

Fortunately for McNally and other city dwellers, graduates’ life expectancy averages only about 72 hours, so by Sunday night, the clones who don’t make it back to the Downers Grove facility before mandatory deprogramming (which, according to Dr. Dinkus, is nearly all of them) will be lying dead in rotting flesh heaps in Grant Park and along city streets. Ryan Sumner, a veteran Streets and Sanitation worker, isn’t looking forward to cleaning up the mess. “I expect I’ll have some choice words for these selfish lil’ bastards come Sunday,” he said as he tossed a garbage bag full of $10 beer cups into his truck, his head swiveling to track a particularly attractive clone. “I mean, take that one, she’s probably never done nothing for no one in her short little life, but, goddamn, that ass though!”♦